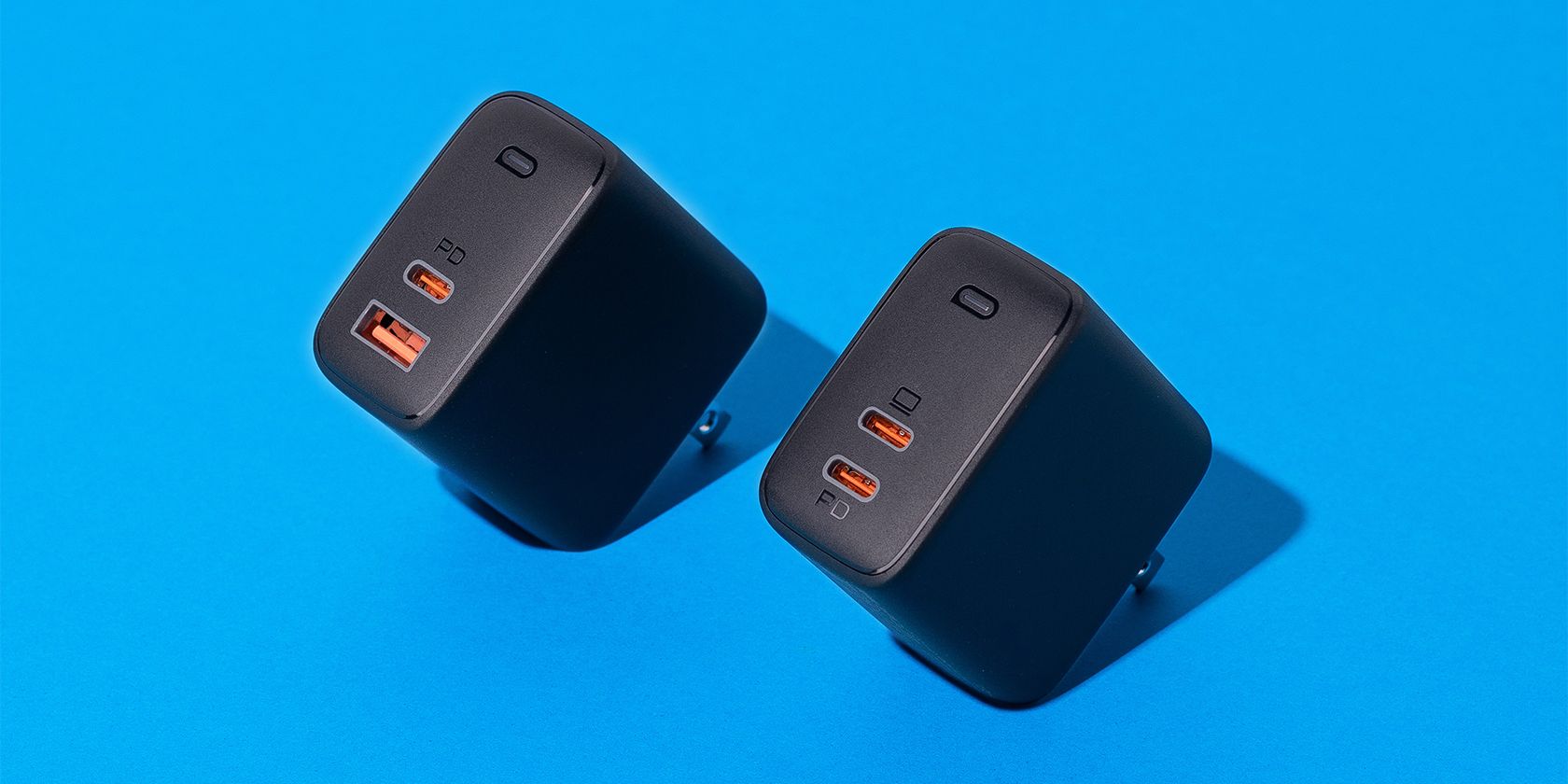 Many top-spec smartphones no longer include chargers in the box. This means, you either have to use your old USB wall adapter or buy a charging brick separately.

But, with our increasing number of USB-powered gears, is it wise to buy a single-port USB adapter? And, if you have multiple fast charging devices, how can you fast charge simultaneously on a single adapter?

This is where the GaN charger comes in. But, what is it? Here’s a look at the future charging bricks, computers, and beyond.

The first smartphones had batteries that were limited to five-watt charging speeds. Manufacturers did this to avoid overheating a battery, which could reduce its lifespan or even cause catastrophic failures.

However, as new technologies emerged, batteries started to get greater capacity in the amount of charge it holds and the energy it can use for recharging. And, to ensure that they don’t use too much power, which translates to more heat, makers implemented internal circuitry that controlled the flow.

This system knows how much voltage and amperage its battery can accept and will, thus, communicate with the charging brick. The phone can also tell the charging brick the type of USB cord you’re using, how much the battery is charged, as well as several other details.

Essentially, modern USB charging bricks are computers themselves. They have small boards that process the information from your device, and they adjust their output as needed. However, because of this requirement, chargers have gotten bigger and heavier.

This is where gallium nitride comes in. As you probably know, computers today are made from silicon chips. This happened because silicon is an abundant element and relatively easy to work with. It’s also an excellent semiconductor because of its adjustable electrical properties.

However, gallium nitride or GaN is discovered to be a newer, better alternative to silicon. This material is better at conducting higher voltage over longer times compared to silicon. Electrical currents also travel faster through it, allowing for faster processing.

This better conductivity leads to higher efficiency. That’s because it doesn’t need as much energy to get the same output as compared to silicon transistors. It also allowed manufacturers to create chips in a denser, more compact form since less energy meant less heat. GaN chips also have higher voltage capacity and are more resistant to heat, perfect for power transfer applications.

All these properties make GaN perfect for charging technologies. It can output the same power as silicon chips without requiring as much space, produce less heat despite having high wattage, and is more power-efficient. That’s why you can buy small GaN power bricks that can fast-charge multiple devices while retaining the same size as your stock charger.

GaN chips aren’t limited to charging technologies. In fact, in the 1990s, GaN was primarily used in LEDs. This material allowed for the development of white LEDs and bright, daylight-visible LED screens.

Blu-ray players also used it as a GaN-based blue laser. This laser had a shorter 405nm wavelength, allowing it to read information closer and with better precision. That’s why Blu-ray discs can hold more information compared to DVDs.

Wireless and radiofrequency infrastructures also use GaN-based chips because of their efficient operation in high voltage environments. You can even find it in electric cars, thanks to their heat-resistant properties.

Why We Don’t Have Gallium Computers (Yet)

One of the main reasons we don’t have gallium-based computers yet is cost. Although silicon technology is expected to hit the theoretical limit of its development in a few years, most chip infrastructure is based on it, making silicon chips widely available.

This pervasiveness makes it economical and easy to produce. Since it’s been in use for over 50 years, it’s already standard technology. For now, most chipmakers stick to silicon because it’s what the market demands.

Furthermore, switching to GaN chips requires extensive investment in new designs, processes, and equipment. Companies will have to adapt their systems so they can work on both silicon and GaN material.

Aside from the cost, GaN manufacturing processes need more refinement. In the year 2000, manufactured silicon crystals only had a hundred defects or fewer per square centimeter. On the other hand, GaN had about ten million times more impurities.

This has since improved to more manageable levels, but it’s still not as efficient to produce compared to silicon. However, as more research and development is done on gallium nitride, we can expect its output to be on par or even better than silicon.

What will eventually push for the widespread adoption of GaN technology is the silicon limit. After all, our technological trend relies on better miniaturization and efficiency.

For example, computers were once room-sized machines that used colossal vacuum tubes that required a lot of energy to operate. The invention of the silicon semiconductor then allowed us to pack in the same power in a chip the size of a fingernail.

That’s why your smartwatch today is more powerful than the onboard computer on the Apollo 11 that took the first humans to the moon in 1969.

In 1965, Gordon Moore, the research and development director of Fairchild Semiconductor and future chairman of Intel Corporation, said that transistors on integrated chips would double every two years.

Related: Why Is There a Global Chip Shortage and When Will It End?

This prediction largely held true. In 1971, chips had less than 5,000 transistors. But today, even mobile processors have over 10 billion transistors. The latest consumer processors feature a 5nm transistor, and we’re expecting to see it shrink to 2nm in 2024.

However, although manufacturers still find a way to miniaturize silicon, we will soon hit its physical limits. The silicon atom is about 0.2nm big, making current transistors about 25 atoms wide.

The 2nm process means we will only have about ten silicon atoms per transistor. If we go below that, the transistor becomes unstable and difficult to control.

The Future Is GaN

For these reasons, many see GaN as the future replacement of silicon. Its properties make it about a thousand times more efficient than silicon. So, if you have a 10nm GaN, you can expect it to be way more potent than an equivalently-sized silicon-based chip.

As silicon will slowly but surely hit its maximum miniaturization size, GaN technology will eventually take over the computing world. So, take a good hard look at your fast GaN charger—because, most likely, that’s what the future will be—compact, efficient, and powerful.

Fast charging allows you to give your device a quick shot of juice and keep running. But are you damaging your phone’s battery in the long run?