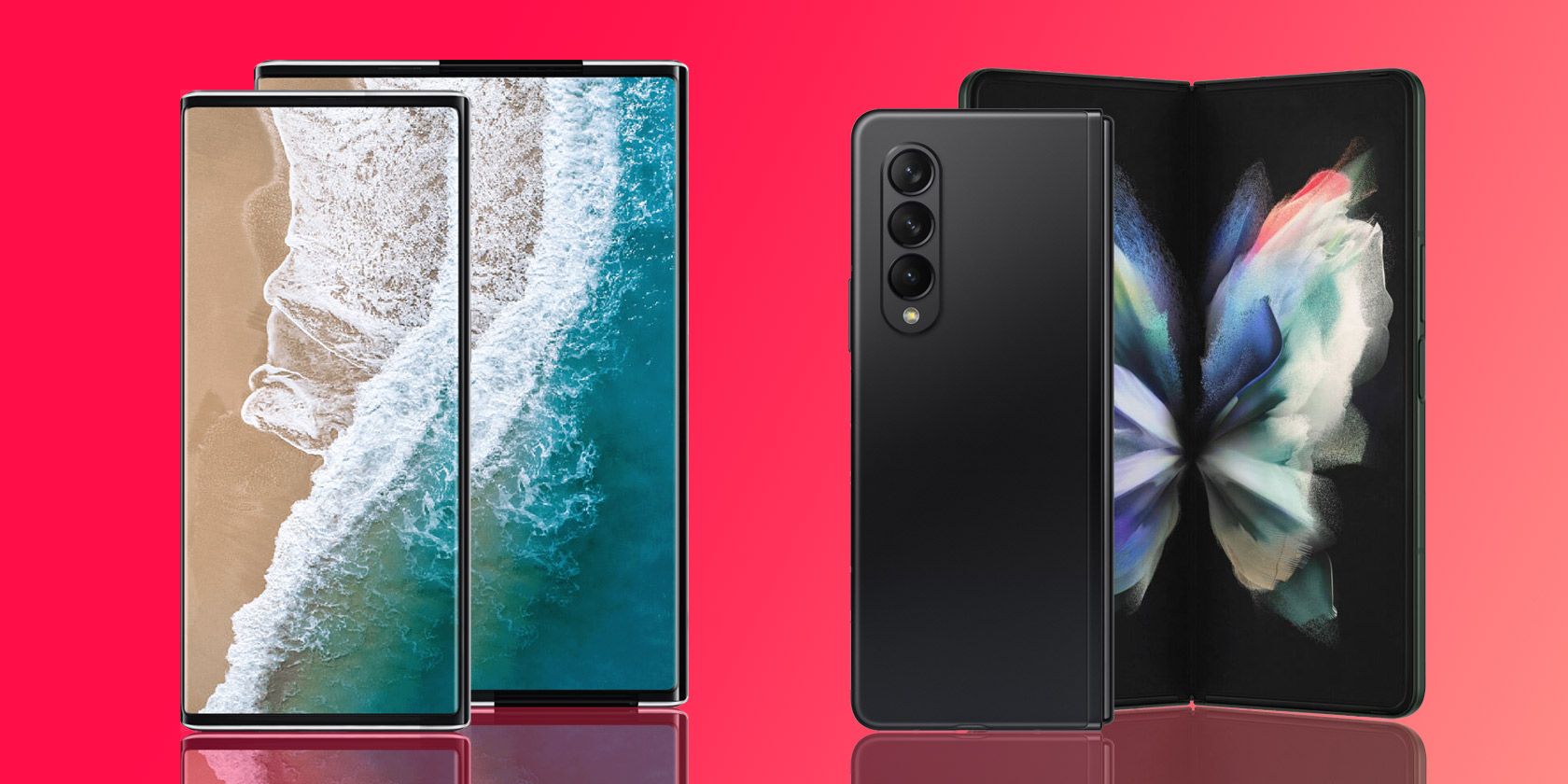 In this article, we will see which one will stand the test of time.

What’s the Point of Using a Flexible Smartphone?

The basic idea with flexible phones is to fit a bigger tablet-like screen in a normal pocketable smartphone body. The purpose here is to elevate multitasking capabilities, allowing you to do more with your phone with minimum compromises.

Foldable phones made the first step toward eliminating the need for bigger devices if a smaller, portable one can get the same job done. Now, rollable phones are ready to join the bandwagon.

Foldable Phones: Why Should You Choose One?

As the name suggests, you can fold foldable phones in half—just like a piece of paper. Well, almost. They feature a special plastic screen and a hinge in the middle of the device to allow the screen and the phone body to bend. You can’t use ordinary smartphone glass like this because it’s rigid and doesn’t flex.

This “flex” can either be an inward fold or an outward fold.

With the inward fold method, the device folds shut to protect the plastic screen from damage. Then, you can use a second cover screen on the exterior of either side of the folded half like you would with a standard smartphone.

With the outward fold method, the main screen folds outwards. So, it’s always facing you—folded or unfolded. Since you can use the folded main screen like a typical smartphone, you don’t need a cover screen.

However, the outward fold method also means that the screen will constantly be vulnerable to environmental damage; it can easily be scratched or damaged. This is why manufacturers don’t like this design and opt for the inward folding method instead.

So far, the foldable form factor has been realized in three major ways:

Related: Why Samsung Needs Its Foldable Phones to Succeed

The Problem With Foldable Phones

Two of the biggest problems unique to foldable phones are the crease and the air gap.

First, let’s talk about that crease. Like how paper wrinkles when you fold it, the same is true for a plastic screen on a foldable smartphone. So far, nobody has a viable solution for this problem.

Another problem is the air gap that foldable phones tend to have. You see, when you fold a foldable phone, it doesn’t sit perfectly flat because doing so would break the screen. Instead, the screen bends to such an extent that it leaves some space—creating a gap—that air, dust, and water can pass through.

When folded, foldable phones tend to have their hinge protrude hang of the phone body. This feels obtrusive when holding the device and looks non-uniform. And that’s without mentioning how heavy foldable phones are since you’re essentially carrying two devices at once.

Rollable Phones: Why Should You Choose One?

If you thought foldable phones were too complicated, you might want to take a seat for this one. Rollable phones are a new flexible smartphone concept, here to steal the thunder from foldable devices.

So far, the only working rollable phone we have seen in action is the Oppo X 2021. Since there are no other alternatives at this point, we’ll be using this device to explain how a rollable phone works.

A rollable phone contains several moving parts inside the device. These include:

When triggered, the mechanism pushes one layer away from the other—revealing a bigger tablet-like screen.

At the time of writing in mid-September 2021, this technology is still very new and not commercially available.

Rollable phones aim to eliminate the tradeoffs that come with foldable versions. These devices don’t have a crease on the screen, and you won’t find an air gap either. Going back to the paper analogy, it’s like rolling a sheet rather than scrunching it up.

With rollable smartphones, you no longer need a secondary cover screen. Instead, you can manually extend the hardware. As a result, you can switch from having a standard smartphone-sized screen to a tablet-sized one using the same display panel.

The introduction of rollable devices doesn’t mean that foldable smartphones will suddenly become useless. While rollable phones have their benefits, the novelty of their technology means that they will have teething problems.

Even though no commercial version of the rollable phone exists yet, we can speculate and suggest that these devices will need to sacrifice a lot of internal space. If they didn’t, the rolling action would become difficult if not impossible.

Sacrificing internal parts could result in huge problems. Users might find that the battery life on these is terrible—meaning that they need to either reduce their phone usage or carry their chargers around regularly.

But that’s not all. We might find that rollable phones have little resistance to water and dust compared to their foldable counterparts. This might also be the case when lined up against the standard iPhones and Android devices on the market today.

Foldable phones have a soft screen that’s easily damaged, and we might also see the same with rollable devices. And, of course, the price tag isn’t likely to be affordable—at least to begin with.

Ultimately, there is no clear winner between foldable and rollable smartphones—at least not yet. We can only get a whole idea of which is better once the rollable has a commercially available device.

Both technology ideas are in their early phases. While foldable phones have had a headstart, their rollable counterparts could catch up if they offer fewer compromises. But whatever happens, smartphone innovation isn’t dying out any time soon.

The Galaxy Flip 3 might not fully realize Samsung’s foldable dream, but it gets much closer to getting foldable phones in people’s hands. Here’s why.

Ayush is a tech-enthusiast and has an academic background in marketing. He enjoys learning about the latest technologies that extend human potential and challenge the status quo. Besides his work life, he loves writing poetry, songs, and indulging in creative philosophies.

Apple MacBook Pro Specifications Tipped Ahead of Launch, Said to Feature Mini-LED Display
Why You’re Seeing More Red Flags on Twitter All of a Sudden
Amazon Fire TV Stick 4K Max Goes on Sale in India
The 10 Most Influential Technologies Invented by Women
6 Negative Impacts of Technology on Children (And What You Can Do)