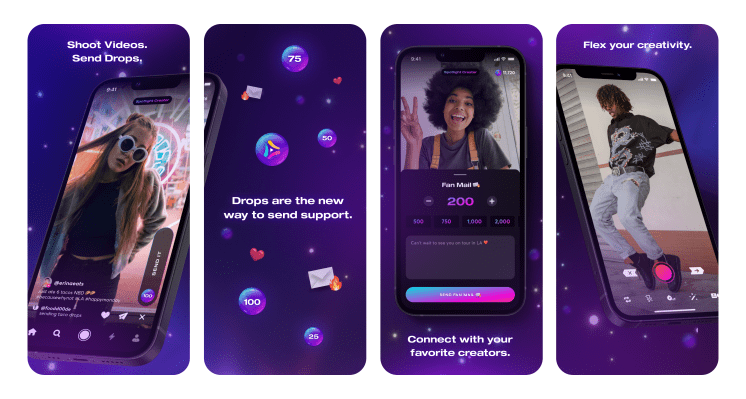 When the Trump administration announced it would ban TikTok in the U.S., a number of alternative short-form video apps began to flourish, as users hedged their bets on a potential TikTok exit. Among these was Byte, an app co-created by Vine co-founder Dom Hofmann, which topped 1.3 million downloads in its first week alone. But when Trump’s ban on TikTok failed, Byte sold to rival Clash — an admission of sorts that TikTok’s momentum couldn’t be beaten. Now, new owner Clash is kicking off round two. It’s relaunching its app with the “best of Byte” under the hood alongside a suite of creator tools for monetizing a fan base.

This time, the focus isn’t on beating TikTok, but working in parallel alongside it.

Clash was founded by Brendon McNerney, a former Vine star who at one point grew his own social following on the now-shuttered app to over 700,000 followers. As someone who worked directly in the creator space, McNerney believes he could offer a unique perspective on creator monetization — something even leading apps can still struggle with today.

The newly rebuilt Clash’s premise is that it can help creators identify, engage and monetize their strongest and most loyal fans.

To do so, Clash is introducing a set of tools for creators and their fans, including a virtual tipping mechanism called Drops (not to be confused with product drops, popular in e-commerce) and a custom messaging system called Fanmail, for starters.

The idea is that creators could grow their overall fanbase by using larger platforms like Instagram, TikTok or YouTube, where they can monetize the crowd through various methods, like advertising revenue share, brand sponsorships and other more direct methods, when available, like tips and subscriptions. Meanwhile, Clash could serve as the backchannel for the fans who are more invested in the creator’s journey — like those who are willing to help fund a creator’s work, similar to Patreon, or those who want a closer relationship with their favorite creators than they would otherwise be able to achieve elsewhere.

“The thing that really stuck out was, in 2019, I started seeing creators post their Venmo links in their bio. It was kind of a head-scratch moment,” McNerney says. He began to think about how those link-in-bio systems could be turned into more of a product. “And so we really started from the question…if Patreon was built now, what would it look like? And then: how can we do what we know well — which is short-form video?” he continues. “We really wanted to build a short-form video platform, where the video was just the medium, but the whole point of the platform was to support your favorite creators and connect with your fans.”

The initial beta version of Clash launched last summer on the App Store. Soon, the team found creators wanted to use it as a more authentic place to engage with fans outside of larger platforms. Creators wanted to create content specifically designed for the top 10-15% of their fan base — people who were already supporting them in other ways, like buying their merchandise, for example.

This led to the launch of Clash’s first product, Fanmail, where fans could pay to unlock the ability to send personalized messages to top creators, who acknowledge them and respond directly.

It also introduced Drops, a digital good purchased from the App Store that fans can use as a token of appreciation or for access to send Fanmail.

Creators can redeem Drops at 2,500 (or $25), Clash says. This is a lower threshold than some creator platforms, like Twitch, where you need to have earned $100 to cash out. Clash says it will also seed its network by gifting hundreds of Drops to new users, free of charge. And, for the time being, Clash will not take a cut of these sales — meaning creators keep 100% of the revenue from the Drops they receive. (The company hasn’t yet decided what percentage it will take when the promotional period ends sometime next year.)

McNerney envisions how Clash can be used in the early stages of content creation and planning, which makes it more symbiotic with larger platforms, like TikTok, instead of a direct competitor. For example, one of Clash’s launch creators, Yasmine Sahid, who makes comedic videos on TikTok, is using Clash to fund her other passion: making music. She’s been building her first music video with the support of fans on Clash, who are funding it through their Drops. And as the video is produced, these fans get access to the behind-the-scenes content and other sneak peeks.

Plus, he argues, innovations in creator monetization may need to take place outside of larger platforms.

“The biggest issue, I think, is while [these large platforms] are experimenting with these tools, they’re not leaning into them. At the end of the day, their revenue is 98, 99% from advertising revenue,” he says. “The model that they see themselves leaning into is just strictly focusing on keeping eyeballs glued to the screen. Whereas, they’re improving their algorithms — they want people viewing — we actually want people engaging,” McNerney adds.

At launch, Clash’s app has been rebuilt to handle future scale and to support monetization tools. Meanwhile, Clash is including what the team loved about Byte, including the way Byte’s Camera worked, the in-app feed and the app’s Discovery page. There are other similarities between Byte’s design and the new app, as well.

And while Clash will gain access to Byte’s existing registered user base of 5 million when it relaunches in Byte’s place on the app stores, it plans to support a variety of creators — not just the young Gen Z’ers who used to try to “bully the millennials” off the original Byte app.

In the near-term, Clash plans to add something called a “fan score” based on their engagement in the app, including entering chats and commenting on videos. It plans to release this feature soon after the public debut.

Of course, even as a platform for the most loyal fans, Clash will have its competition from startups and big tech alike. Twitter has built Super Follow to cater to creators while Instagram has been spotted working on its own fan subscription product in recent days.

Ahead of its relaunch, Clash raised $9.1 million in funding over three rounds. The latest was a seed round led by Reddit co-founder Alexis Ohanian’s new fund Seven Seven Six. Other investors in Clash include M13 Ventures, Plug and Play, ACME Capital, and angels Jesse Leimgruber (NeoReach co-founder) and NBA Players, Austin Rivers and Seth Curry.

Clash is relaunching today under Byte’s listing on the App Store and on Google Play.