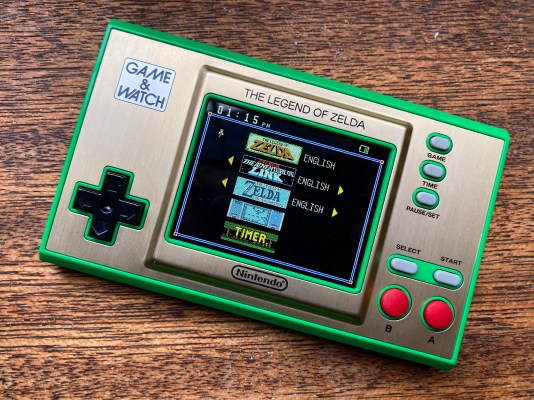 I have in my hands the Legend of Zelda Game & Watch, the second in Nintendo’s line of whimsical throwback handhelds clearly meant as stocking stuffers for those who already have (or can’t find) a Switch. It does a fine job, and the three old-school Zelda games included are great options for Nintendo-hard adventure that actually fits in a pocket.

Announced a couple months back, this $50 gadget is very similar physically to last year’s Mario Game & Watch, the first in the series based on Nintendo’s pre-Game Boy line of handhelds. The only difference is the addition of the start and select buttons, which are actually used in the Zelda games.

The games themselves are the inimitable original, The Legend of Zelda; its brutally hard side-scrolling sequel The Adventure of Link; and cherished puzzle box classic Link’s Awakening, recently remade in style. There’s also a recreation of a classic monochrome Game & Watch from the ’80s, though its entertainment value is, frankly, limited.

You can play each straight through, or hit the Game button to switch to another, saving your progress. There are no save states beyond that, though, so get ready to die a gazillion times in Zelda II.

The display is nothing fancy but matches the game resolution well, looking as clear as can be expected at that size. It’s definitely harder to play on this handheld than on a TV but very doable. For the record, these close-up pictures show more pixelation than you notice when playing, there’s definitely no screen door effect as you see in the shot below. In a nice little bit of attention to detail, Link’s Awakening has an aspect ratio adjustment option; the original Game Boy screen was narrower than 4:3, so you can switch between them on the fly. Notably this is the original monochrome version, not colorized. 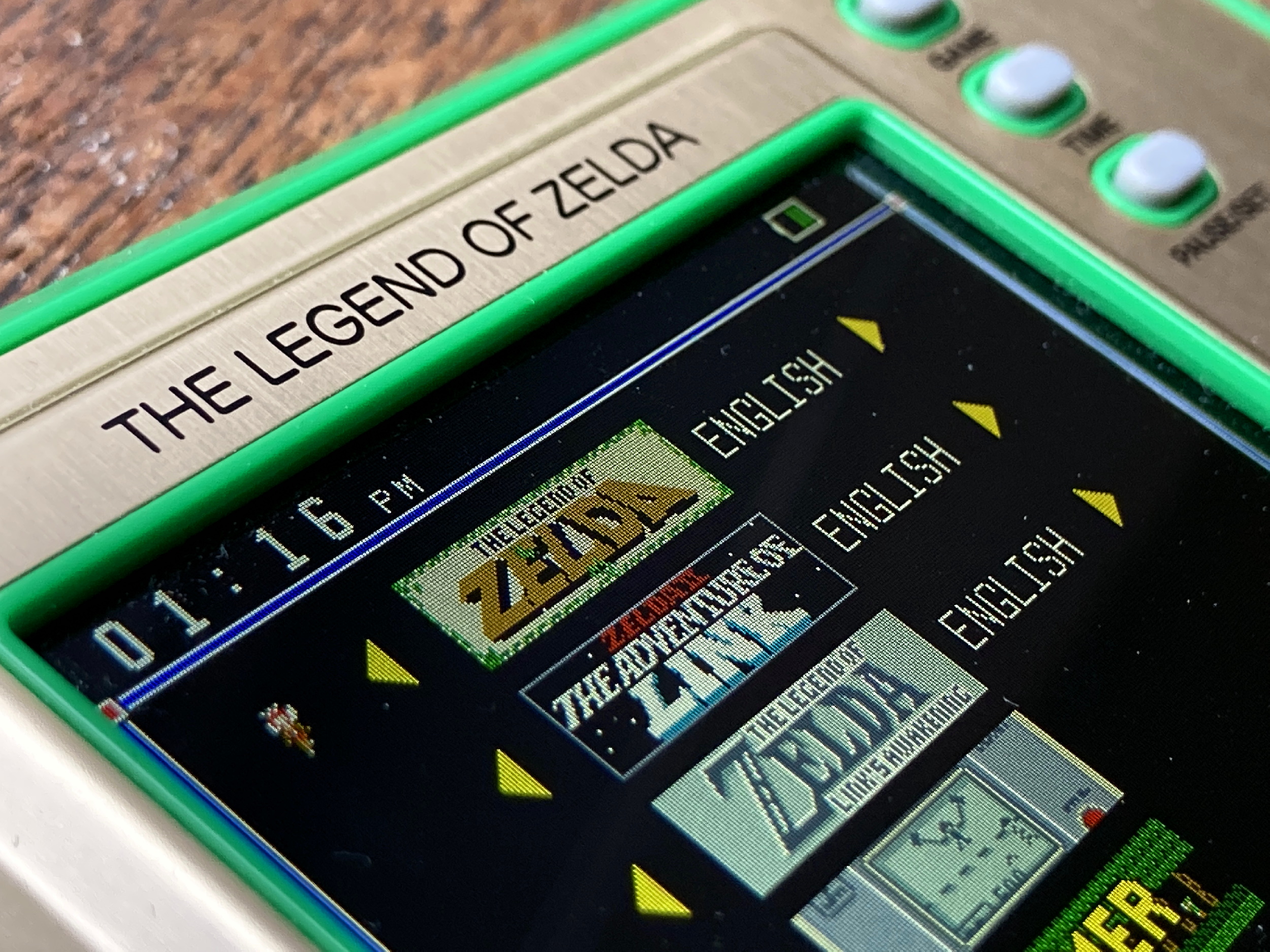 The screen actually looks very clear, the grid effect is an effect of the camera.Image Credits: Devin Coldewey / TechCrunch

The “watch” portion consists of a clock and now also a timer app. The clock is quite fun, actually: At midnight and noon Link begins his quest in the original game, starting out by collecting his sword and progressing rather haphazardly through the game, repeatedly killing the endlessly spawning monsters on a screen for a minute at a time — and sometimes dying himself, only to likewise be revived — before moving on to the next one. It’s not recorded by a simple AI playing the game, so you won’t see the exact same thing happen over and over.

At 7:59, for instance, he is clearing a green dungeon room of Stalfos, and as the clock strikes 8 he always advances into the boss room, where he plays the flute to reduce Digdogger, slaughters the poor shrunken thing, and collects his 5th piece of the Triforce. At 11:30 he enters the final dungeon and at midnight effortlessly dispatches Ganon in a bit of an anticlimax — and the cycle repeats, albeit with a different color scheme. The dungeons and overworld are not exactly as in the original game but have been modified in various ways to allow for the clock. Still, you get a sense of progression as this Sisyphean Link progresses through the game, collecting the various tools and treasures over and over. 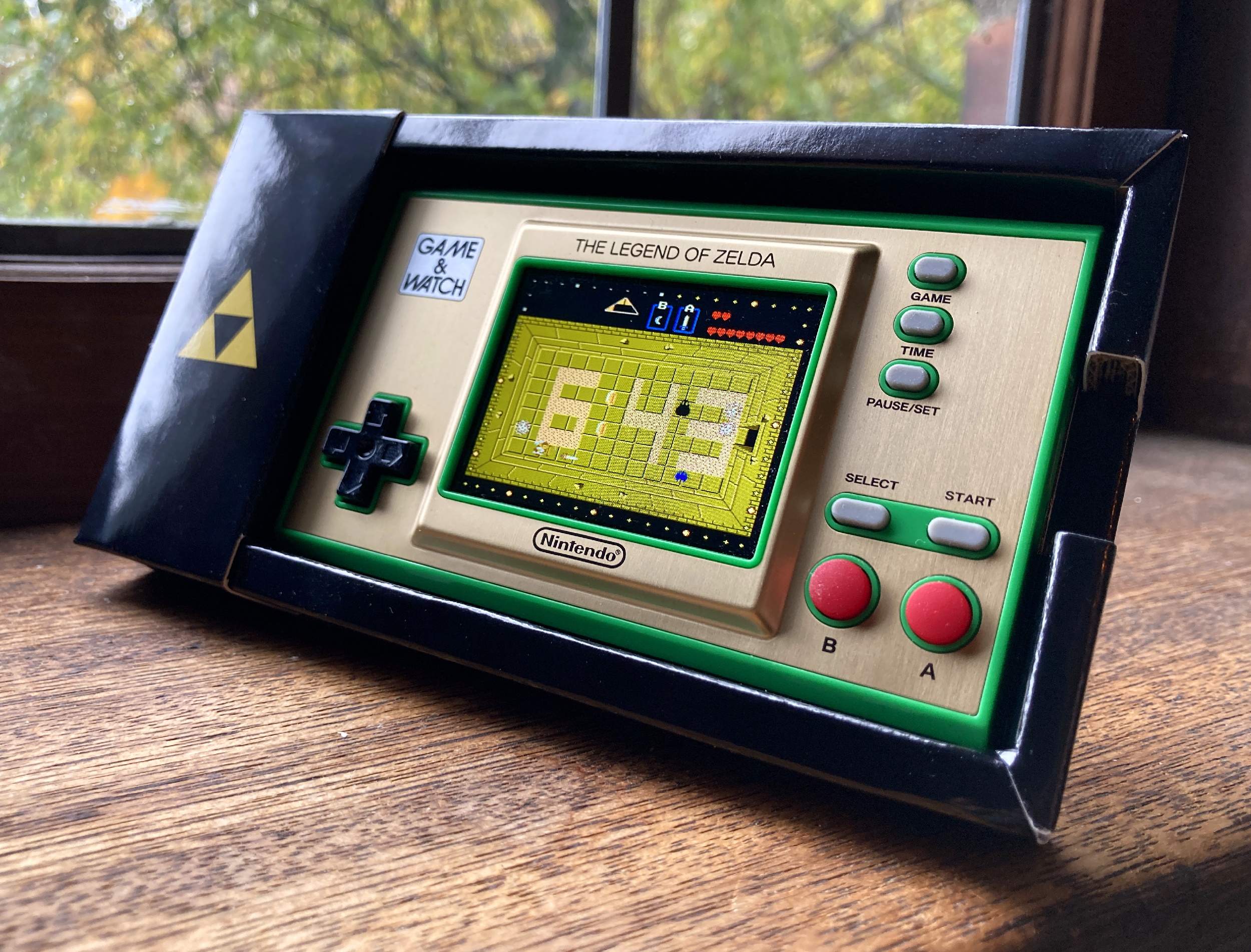 The timer is a limited but helpful little item which does exactly what you might expect, counting down from any full minute increment under an hour. Link battles waves of enemies in Zelda II style, and seems to have as much trouble as I do killing those stupid blue knights. It tracks his highest “score” for a given time, so you can set it to three minute rounds and take bets on how he does. 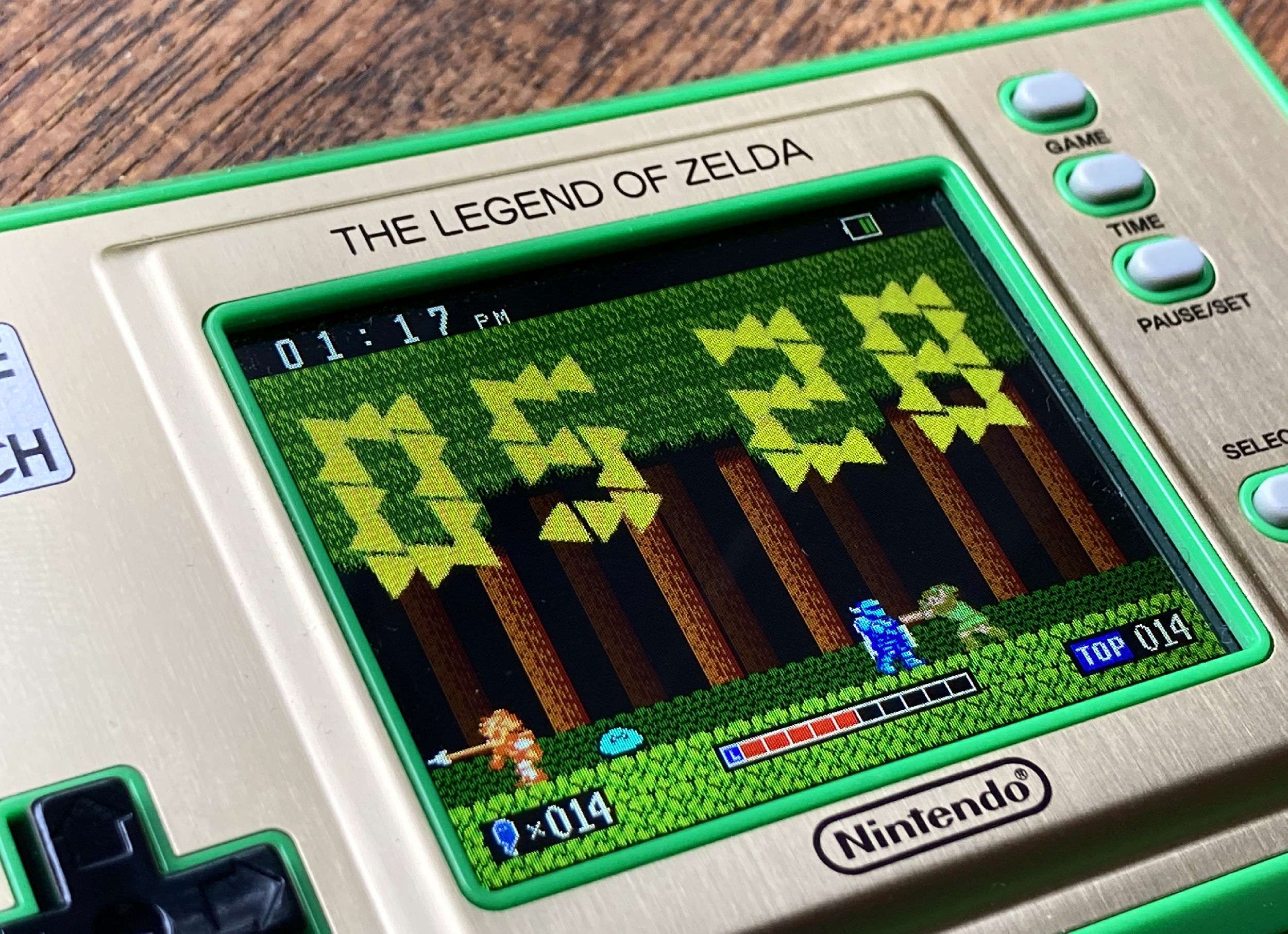 You can do it, Link! (Again, the moire effect here is exaggerated, to the eye the display looks very clean)

The hardware, as I said, is largely unchanged, but the addition of the start and select buttons means that A and B, already rather far down the device, are even lower. I think it has graduated from “not ideal” to “uncomfortable” if you plan to play for longer than a few minutes and have average-size hands or larger. Nintendo, we can shift those up half an inch, can’t we? Fortunately the device is very light.

On the rear of the Zelda Game & Watch is a little Triforce that, for no reason at all, lights up very dimly. It’s a sweet little totally unnecessary detail and indicative of someone over there really loving this thing.

Battery life will likely depend on how bright you make the screen, but it’s at least 5 or 6 hours and likely more. I’m testing it right now and will update this post later.

Another fun detail, and perhaps I missed this on the Mario one, is that the box it comes in doubles as a little stand; you fold out cut-out legs and it holds the device at the proper angle to be seen — the viewing angle isn’t great, so leaving it flat or propped straight up isn’t ideal.

All in all the Zelda Game & Watch is a fun little gadget that any lover of the NES and Game Boy classics will appreciate. The only question is whether you’ll be able to get hold of one.